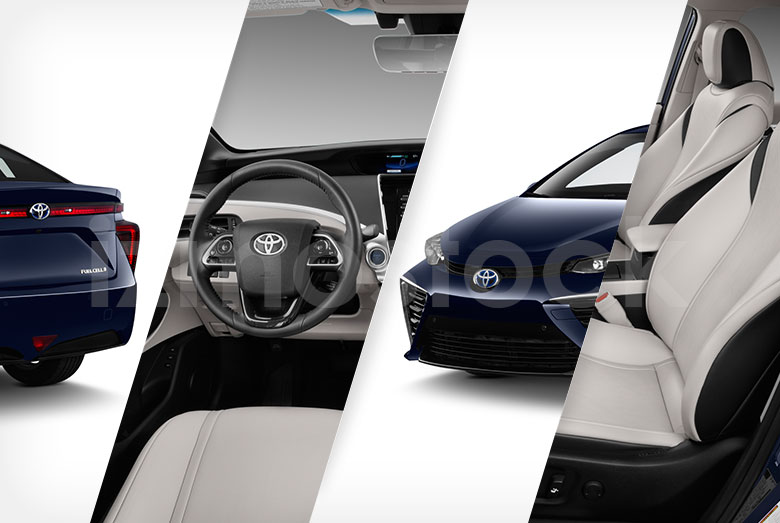 A one of a kind for Toyota and the car industry, the 2019 Toyota Mirai may just be the future for cars. Piggy backing its looks from the famous Toyota Prius, this mid-size hydrogen fuel cell vehicle (FCV) rmoves forward as a bolder statement in appearance and technology. 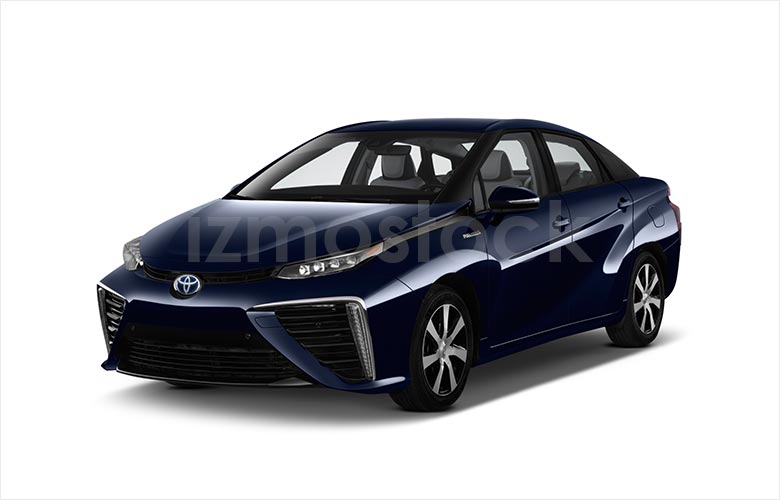 Moving out of the box, the 2019 Mirai takes a lot of risks with its outward appearance. The hood appears to be elevated from the rest of the vehicle, sitting atop a black bar and the headlights. The headlights alone are a far departure from what most may be used to, as they consists of a row of domed LED lamps. 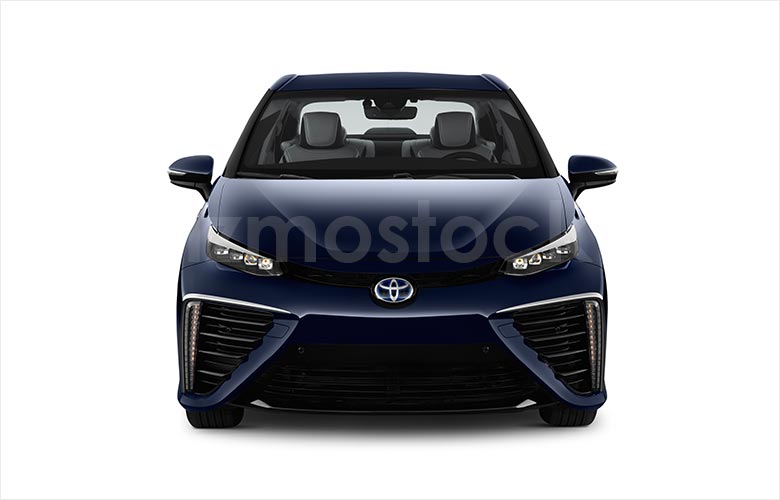 The fascia appears to cut the grill in three although the sides are faux vents. Fog-lights double as turn signal lighting and form a vertical stripe just before the front wheels. Some of the latest design trends are taken to an extreme, such as the floating roof, which the Mirai appears to almost not have. The profile will remind most people of the latest Prius, however the 2019 Mirai differentiates itself with a flat front and additional curvature above the rear wheel well. 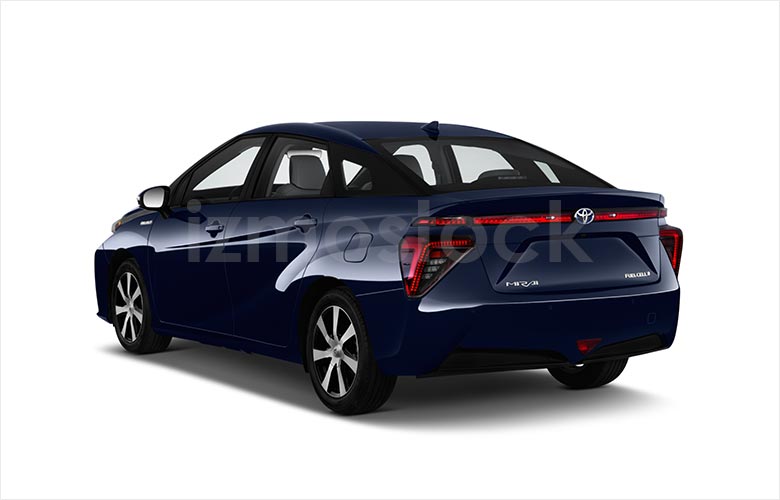 Wheel design take a turn to the bold with flat bright silver spokes and no additional design flourish. The rear is also an oddity with a three-part taillight. Below a small dovetail spoiler runs a horizontal band of lights which is barely separated by the fascia and blends into two pyramid like taillights. The rest of the fascia is smoother and devoid of ridges or bumps and is finally dotted at the bottom with a polygonal brake light. 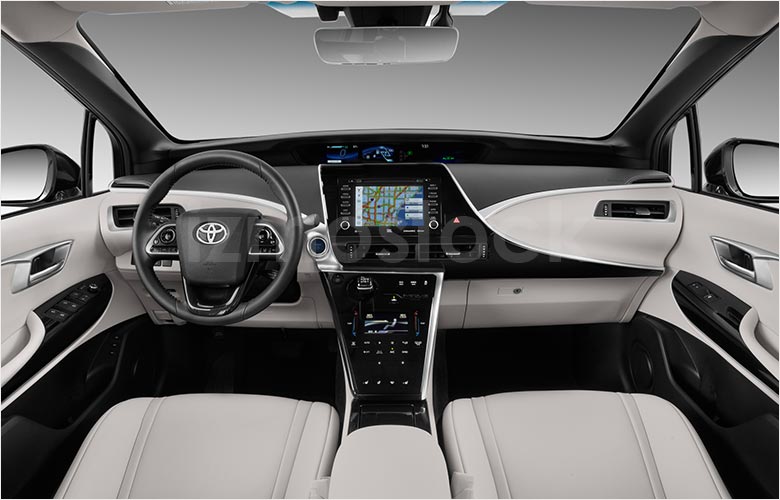 Prius owners will also recognize the interior layout of the 2019 Mirai. Centralized driving gauges sit at the top of the dashboard followed by the infotainment screen and then a separate screen and buttons for the climate at knee level. The dashboard itself is alive as wisps of piano black, off-white leather, and flat black leather, each separated by a band of silver trim. The shifter setup is also the same as the Prius with a push-to-start button and a small transparent plastic shifter knob. 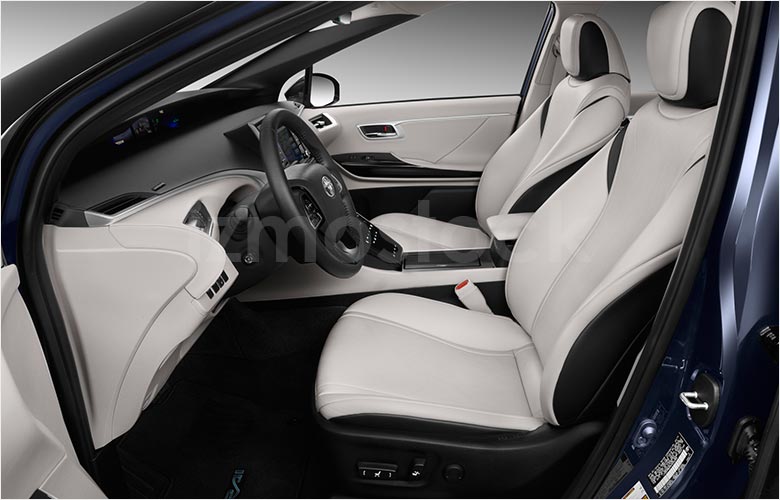 The seats have an organic roundness to them which begins at the headrest’s extended back. The rest of the leather wrapped seating is completely smooth and is only separated by the stitching lines. Mechanical seat controls are located in the usual spot at the bottom of the seat, and Toyota was even generous enough to feature mechanical steering wheel adjustment. The profile view from the driving door perfectly shows of the unfamiliar design of the dashboard and how each feature is raised outward with the dash forming a concave curve. 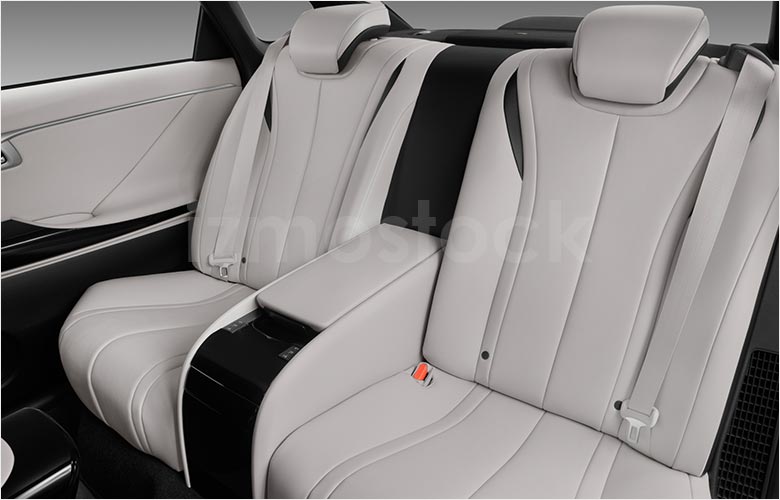 The rear seats are fit for two with no option of folding down. A mandatory arm rest is home to storage and heat seating which is a usual addition to luxury cars.

From its underlying hydrogen technology to nearly everything else, the 2019 Toyota Mirai shapes up to not only be the next step for the Prius, but for all vehicles. Embracing it’s own futurism, the 2019 Mirai takes its looks to the extreme to guide the rest of the industry to the future.

To license hi-res stock photographs of the 2019 Toyota Mirai FCV, Contact Us.